“You don’t get to make decisions for me, Mr. Pierce.” 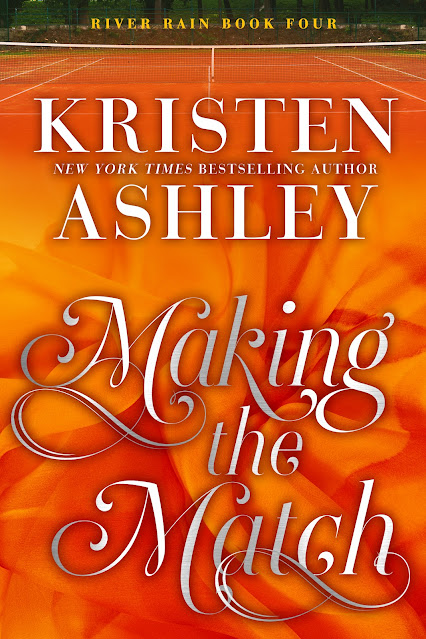 If you love second chance, single parent romance, pining, a couple over 40, redemption and forgiveness, this is the book for you.

Decades ago, tennis superstar Tom Pierce and “It Girl” Mika Stowe met at a party.

Mika fell in love. Tom was already in love with his wife. As badly as Tom wanted Mika as a friend, Mika knew it would hurt too much to be attracted to this amazing man and never be able to have him.

They parted ways for what they thought would be forever, only to reconnect just once, when unspeakable tragedy darkens Mika’s life.

A time comes when they’re both unattached.

But now Tom has made a terrible mistake. A mistake so damaging to the ones he loves, he feels he’ll never be redeemed.

Mika has never forgotten how far and how fast she fell when she met him, but Tom’s transgression is holding her distant from reaching out.

There are matchmakers in their midst, however.

And when the plot has been unleashed to make that match, Tom and Mika are thrown into an international intrigue that pits them against a Goliath of the sports industry.

Now they face a massive battle at the same time they’re navigating friendship, attraction, love, family, grief, redemption, two very different lives lived on two opposite sides of a continent and a box full of kittens.

Kristen Ashley is the New York Times bestselling author of over eighty romance novels. She’s a hybrid author, publishing titles both independently and traditionally, her books have been translated in fourteen languages and she’s sold millions of books.

Kristen recently released GOSSAMER IN THE DARKNESs, a novella with 1,001 Dark Nights based in Kristen's Fantasyland universe.

In September 2022, she'll publish the fourth in the River Rain Series, the story of Tom and Mika, MAKING THE MATCH. She also has upcoming books in her Wild West MC romance series, and her romantic thriller series, Misted Pines.

Kristen, born in Gary and raised in Brownsburg, Indiana and was a fourth-generation graduate of Purdue University. Since, she has lived in Denver, the West Country of England, and she now resides in Phoenix. She worked as a charity executive for eighteen years prior to beginning her independent publishing career. She now writes full-time.

Although romance is her genre, the prevailing themes running through all of Kristen’s novels are friendship, family and a strong sisterhood. To this end, and as a way to thank her readers for their support, Kristen has created the Rock Chick Nation, a series of programs that are designed to give back to her readers and promote a strong female community.

You can learn more about Kristen and the Rock Chick Nation on her website: www.KristenAshley.net